blinking fake LEDs in the computer

The last step ended with the IO library source/header files created and the STM32Cube project created and able to cross compile for the microcontroller, although executing nothing but some peripheral initializations. The next step is adding some lines in the test Makefile telling it to compile the IO library and find some STM32 headers. This will allow the development of a test for this library and the HAL GPIO mock library.

The next image shows a basic view of the firmware architecture around the IO Library. The continuous arrows show the call path while the firmware runs. The Application calls functions from the IO_Driver that calls HAL_GPIO functions that deal with GPIO peripheral registers to set pin levels. The dashed arrows indicate the path we’ll be dealing with now where the tst_IO_driver calls the IO_driver while running the tests, the IO_driver calls the mock_HAL_GPIO (without even knowing it), the mock_HAL_GPIO uses functions from the Cppumock framework to inform the test every function call it that was executed and which parameters were sent to them. 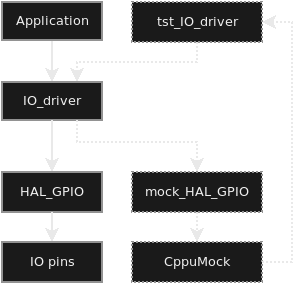 Everything in the dashed path must be compilable in the test environment as known as the computer we are coding at. Any microcontroller dependent functions used at the IO_driver must have a mock function that will be called instead of the real HAL GPIO functions. All the mock functions MUST follow the function prototype of the real HAL_GPIO, the mock will include the original HAL_GPIO header file (stm32f3xx_hal_gpio.h) to enforce this. This is not a big deal since the STM32 header files are well structured but will probably require adding a few include paths to the test Makefile.

Spoiler alert: There are reasons to create a header file for the implemented mock and I will get there in the future. It is not required at this moment.

This is the moment to set the folders structure inside the test folder. My choice is going like this:

The file extensions are important here. The test is coded as C++ to get a more efficient use of Cpputest. The mock is coded as C since the original library being mocked is in this language too. This will avoid linker errors between the IO_driver and the mock. The Cppumock provides the full set of tools and functions in C++ and C. The C version is a bit more confuse since it tries to emulate an object oriented implementation with pointers and structures but it is not rocket science and is learned quickly.

I suggest keeping open the stm323xx_hal_gpio.h (it is located under Drivers/STM32F3xx_HAL_Driver/Inc/) to understand what it implements since it will be included in the mock file. Copying from there the prototype for each function that will be mocked is a helper too.

The first version of mock_hal_gpio.c includes the Cppumock framework and the HAL_GPIO header and looks like this:

Add these lines to the Test Makefile so it will find the Mock and IO_driver files:

This is probably enough to build the test without include errors. At this point I get a few times this error -Werror=unused-parameter that is due the emptiness of our mock’s first version and Cpputest default behavior of compiling with a lot of warnings enabled and treating all warnings as errors.

There are two possible solutions for this:

I usually executed the second option so my the messages after the test build process are empty but a friend has convinced me to use the first option. It will allow the test to build and execute and keep showing warnings for useless parameters on every build. This can help in detecting parameters that should have some use inside the function but got forgotten and parameters that became useless as code advanced and could be removed.

The first version for my IO library will verify only the function io_setHigh and io_setLow, for a single IO pin (IO_LED_GREEN). This Tag is defined inside an enum in io.h as all IO devices required for this firmware. THis test includes the MockSupport_c.h and calls some of its functions.

The teardown() is a code section that will be executed after every test in the test group. In this test it executes mock_c()->checkExpectations() to verify if all expected calls defined in a test were executed as required and mock_c()->clear() to desalloc everything created in the mock functions for this test so no warning about memory leak will show up due this library. The first version of this test will look like this:

Both tests verify that the IO library is calling the HAL_GPIO functions with the correct parameters (port, pin and state). The io function is called after the expectations are set and the mock functions implemented in mock_hal_gpio.c are responsible for snitching that they were called and the received parameters. The mock is coded like this:

ALl the changes to this point were pushed in this commit. Although building the project like this returns these errors:

They are self explanatory, telling that our 2 new tests failed with expected function calls that have not been called. It even lists the expected parameters in each one of them. We are done with the stages “Code the test”, “Make it compile” and “Watch it fail” or our TDD cycle. It is now time to make the test pass by coding the IO driver.

This io.c satisfies all the tests for now, but works only for IO_LED_GREEN. Remember not coding more than your tests require. It’s not required testing for all the GPIOs but some will get added later in the tests and in the library.

One step were skipped in this article: making tests for the mock library. It may seem like too much effort but mock libraries must reflect the real behavior of what they are replacing. This HAL_GPIO is simple but replacing a external flash memory CI and all its interfaces are pretty complicated. I’ll add tests for this mock in the next commit probably but without writing about them, pay attention for the commit timeline to check this.

I’m ending here with the commit link as always.

A small bonus pointer is adding this section on the Makefile so the build process logs are cleaner and easier to understand: